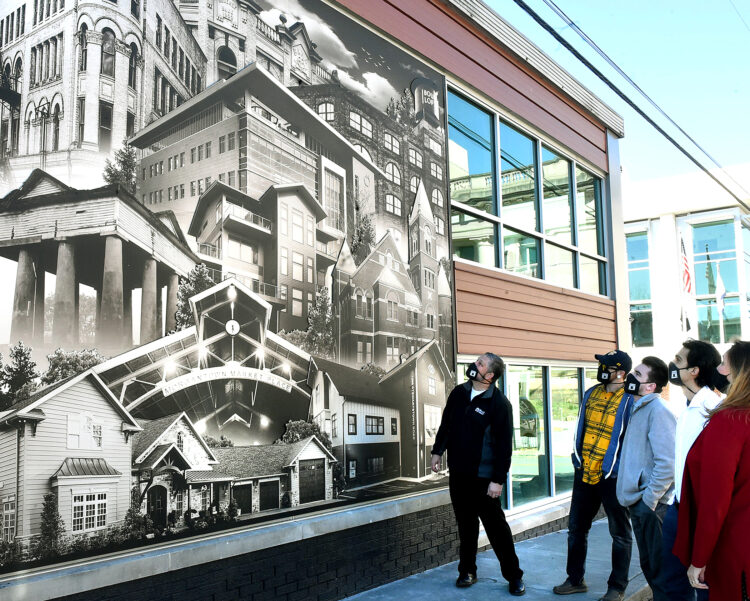 A new downtown mural was unveiled by Mills Group on Wednesday, November 18th at its office on High Street in downtown Morgantown.

The mural is part of the celebration of the 15th anniversary of the firm and the opening of its High Street office. The new downtown office is a reflection of the firm’s commitment to community and to the adaptive re-use of existing buildings.

“In late 2018, discussions began internally about how to create a way to celebrate Mills Group’s design achievements in the state. Ideas sprang forth involving creating a large-scale art mural that would stand proud over time and could contribute to the public art scene in downtown Morgantown,” says Managing Principal Michael Mills. “With the relocation of Mills Group’s Morgantown office to High Street and the 15th anniversary on the horizon, it seemed like a perfect fit to bring this idea to life on a public surface of the new office.

“Two years and several design iterations later, we are finally ready to bring this mural to life,” says Mills. “Comprised of a wide array of architecture, master planning, and historic preservation projects, the mural represents principles for which Mills Group stands. It is a testament to the hard work that our team has put forth and the clients, friends, and family that have shared their visions with us.”

The art installation is mounted on metal panels of various projection, creating depth in the composition and interest in the full-spectrum lighting reflection. Illumination will be powered by solar panel arrays—a Facade Improvement Grant through Main Street Morgantown helped fund the installation of programmable color-changing lighting on the building’s High and Kirk street facades as well as two solar arrays that serve as awnings over the entrance doors to the building.